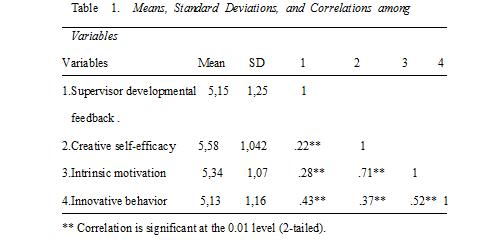 For measuring self-efficacy, along the lines of Tierney and Farmer (2002), we have proposed four types of questions (e.g., I consider that I’m good at developing and presenting new ideas)  regarding employees’ self-efficacy beliefs about their activities (Cronbach a = .85).  For measuring intrinsic motivation, a 5-item scale as posited by Tierney, Farmer, and Graen, (1999) was used (e.g., I like to find solutions for complex problems; Cronbach a – .86).

On innovative behavior, we have proposed seven self-reported questions (e.g., we try to find new technologies, products, services and new methods for conducting the work; see Tierney, Farmer, & Graen, 1999) about employees’ innovative behavior (Cronbach a – .92).   A Likert-type scale ranging from 1, strongly disagree, to 7, strongly agree, was used to define the answers.

According to Bartlett’s test, the matrix is not an identity matrix. The null hypothesis is rejected. The variables under analysis are correlated, thus factor analysis is justified. The Cumulative percentage is 61. 139. Four factors explain 61.139% of common variance.

Besides the reversed item of supervisor developmental feedback, all of the variables had values higher than 0.4. It had no loading on any factor that made weaker the correspondence between the structure of a set of indicators and the construct it measures.

Alpha Cronbachs for almost all of the measures were higher than .70. Removal of any item or set of items in any measure did not appreciably improve estimates of internal consistency. So, all the variables used in the research were internally consistent.  Separately measured they registered high alpha coefficients.

In the table below the alpha coefficients are presented for all of the variables.

A reversed item, supervisor developmental feedback, turned out to have slightly higher value than Alpha coefficient.  Nevertheless, a review of all of the scales together reveals that a high reliability was registered (.913).

GUIDE FOR TESTING THE METIATION EFFECTS  IN MULTIPLE REGRESSION 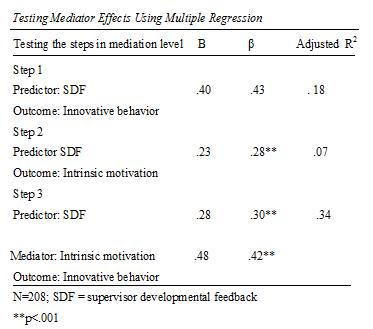 The unstandardized regression coefficient (B=.23) related with this relation also was significant at the p<.0001 level. Thus the condition for step 2was supported, supervisor developmental feedback was again significant.

This third regression equation also provided an estimate of the relation between predictor and outcome variable. If B equals zero in that relation, there is complete mediation. However, that path was .48 and still significant (p<.0001).

To summarize, the analysis showed that intrinsic motivation has a mediating role between the independent (supervisor developmental feedback) and dependent variable (innovative behavior).

Hypothesis 2:  Creative self-efficacy will be positively related to innovative behavior through the mediating role of intrinsic motivation 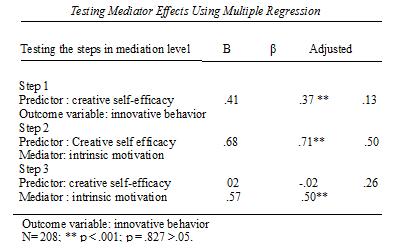 Table 2 provides the results of analysis:

Due to high correlation with intrinsic motivation (.711), creative self-efficacy got excluded from the model, since regression allows the variables that are in weak correlation with each other and have strong predictive power on the outcome variable.

In this case regression made insignificant the variable that had less (.37) predictive power on innovative behavior than the other variable, intrinsic motivation (.52).   The strong power of self-efficacy is expressed by the high correlation with intrinsic motivation that, in its turn, shows high predictive value on outcome variable: innovative behavior. 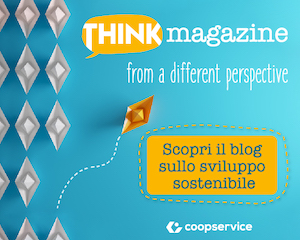 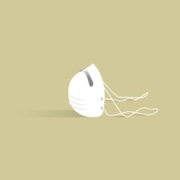 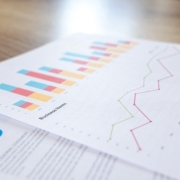 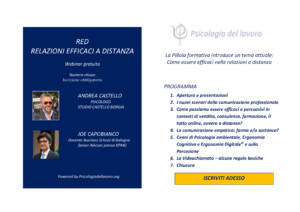