How people behave during an escape is referred as evacuation behavior. Lots of scholars have tried to develop a comprehensive and integrative model of human behavior in evacuation from buildings (Gershon et al., 2007; Kobes et al., 2010; Kuligowski, 2008) and most of them have concentrated their attention on the individual actor, taking into account issues like individual threat perception, individual decision making in crisis (Aguirre, 2005).

Another characteristic of this type of studies is that they usually concern evacuation in case of fire (Aubé & Shield, 2004; Benthorn & Frantzich, 1996; Graham & Roberts, 2000). A possible explanation is that fires occur more often than other disasters like earthquakes or hurricanes and that they don’t depend on any geographical position. So they are more common. As will explained later on, the type of hazard can change the behavioral response, but lots of findings can be applied to different situations of evacuation. In this literature review we will present two recent different behavioral models for evacuation, one presented by Kuligowski (2008) and the other one developed by Galea, Dreere, Sharp, Filippidis and Hulse (2010). They are not in contrast with one another, but they only differ regarding the terms used and some details.  Kuligowski (2008) suggests an interesting conceptual model of the behavioral process for evacuation from building fires consisting of 4 phases:

The response phase is comprised of 3 stages: notification, cognition and activity. The notification stage is similar to what Kuligowski (2008) calls the perception of the cue phase. Indeed, in this step, a cue conveys to the occupants that an unusual and potentially dangerous event is occurring and that they have to evacuate. The notification stage ends with the beginning of the cognition stage, which is analogous to the interpretation of the cue and decision making phases. Nevertheless, Galea and colleagues (2010) specify three different types of decisions about how to react:

If occupants decide to react following the third point, the activity stage starts. This phase could occur in parallel with the cognition stage and they can affect each other: activities leading to new cognitions and vice versa. So occupants can go and come back between these two stages, they can return to the cognition stage to understand new developments of the situation or interpret new information and change the next course of actions planned. During the activity stage, occupants perform the Action Tasks or the Information Tasks that have developed during the cognition stage. Some examples of Action Tasks can be: shutting down a work station, packing work items, packing/collecting personal belongings in the immediate vicinity, physically moving to another location to perform an action (e.g. fight fire, collect an item). With Information Tasks Galea and colleagues (2010) mean seeking, providing or exchanging information concerning the incident or required course of action and may include, calling someone on the phone to seek or provide information, seeking or providing information in person, engaging with electronic media (e.g. television, radio, text services, etc), investigating the incident. The activity stage starts with the beginning of the planned tasks and ends with their conclusion. The end of the activity stage also marks the conclusion of the response phase and the successive beginning of the evacuation movement phase. 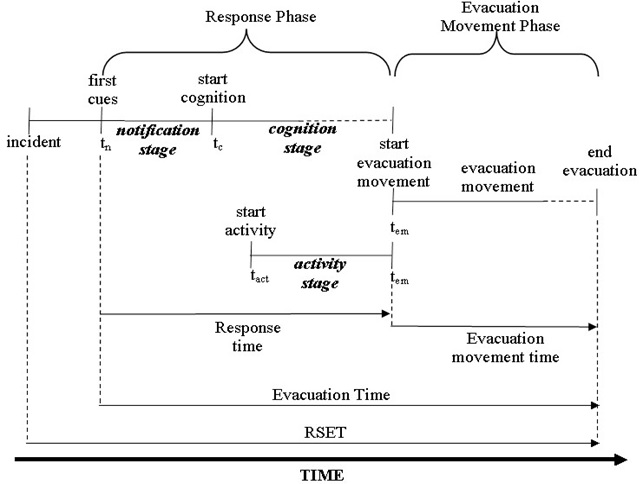 This response phase produces a delay time in beginning the evacuation process. It can go from a few seconds to some minutes and sometimes the pre-evacuation time is even greater than the actual time needed to evacuate (Gwynne et al., 2003). Predicting this delay is essential to be able to calculate realistic evacuation times. The delay varies according to the type of the alarm system in place, the time of the day, the presence of additional cues that can support the evacuation like instructions or smoke (Gwynne et al., 2003). Moreover, the response delay varies also according to the characteristics of the occupants, the hazard safety features and the type of occupancy (Proulx & Fahy, 1997). Indeed, office and residential buildings are diverse environments and have different characteristics. Differently from residential occupancies, in offices people are usually not responsible for others like children, elderly people or family members in general that need assistance. Working people are capable adults that don’t have to take care of other people and when the emergency alarm rings, they can suddenly start rescuing themselves. Another feature of office buildings is that people are usually awake, dressed and active. For this reason the time needed to start the evacuation is lower. They don’t need to wake up or to get dressed, activities that are more usual if people are resting at home. Moreover, people working in office buildings are usually trained for emergencies. Most of the times they know emergency procedures and regularly receive trainings or do drills, while occupants of residential occupancies don’t. Finally, people working need less time to interpret the cue and understand that is time to evacuate because in the office environment usually it is possible to rapidly observe others and interact with colleagues about how to face the emergency (Proulx & Fahy, 1997).

During the evacuation movement phase occupants perform the actions needed to exit the building. The most important element of this phase is the exit choice. Benthorn and Frantzich (1996) conducted an interesting experiment to test their Theory of Choice by Distance and Familiarity, revealing the preference for the normal exit instead of the emergency exit. This is due to the tendency to choose the known before the unknown, and in case of known routes the familiarity has more importance than the width or length. Moreover, the authors investigated the condition in which, instead, occupants chose the emergency exit: “if the distance to the normal exit was twice the distance to the emergency exit and if that exit was open almost all the persons chose that exit” (Benthorn & Frantzich, 1996, p. 5). What unexpectedly emerged from this study is that people are not aware of the reason of the exit choice, leading the authors to suppose that the decision process was on an unconscious level.

According to Frantzich (as cited by Kobes et al., 2010), the time needed for movement purposes is well documented, meaning that it is possible to measure the time needed to egress different types of buildings and occupants. 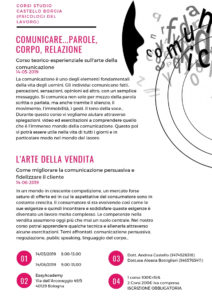